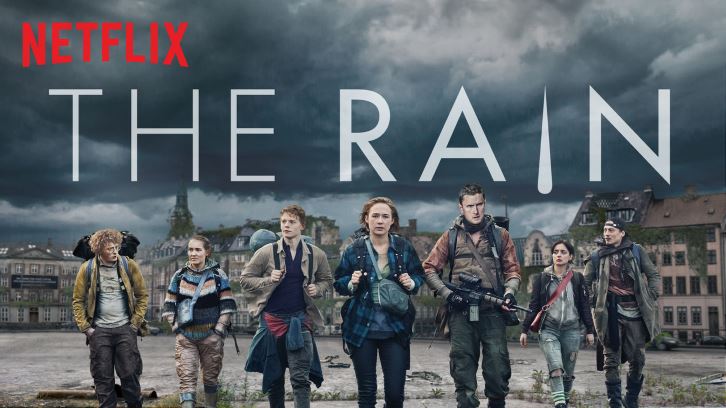 I love a good post-apocalypse. I’m not sure if I’ve ever seen one, but I am sure that if I ever did, I would love it! In the meantime, I am hopelessly drawn to this genre. 🙂

The Rain wasn’t bad, honestly. In the post apocalypse genre, it rates far better than average. After the first episode, which is a bit slow, the pacing is non-stop and I quickly watched the entire 8-episode season.

The premise is fairly straightforward: A virus is released into the world, transmitted in the rain. A scientist partly responsible for the outbreak hides his family in a bunker, where siblings Simone and Osmos wait for six years, until they run out of food. When Simone takes her first tentative steps outside the bunker, she is met by a group of starving survivors whose ranks she and her brother join.

My big problem with the show is simple: Too much of the plot hinges on the unwillingness of the main character, Simone, to accept reality and on the inexplicable support she receives from fellow survivors who truly have no adequate reason to take up her cause — to protect her brother and find her father. Once I accepted this about the show, I was able to suspend disbelief and enjoy the ride through this reasonably solid post-apocalypse version of Denmark.

The final episode of the show doubled down on Simone’s utter contempt for reality, making me worry about season two. Still, in a world where truly excellent apocalypse has yet to manifest, this show has far fewer problems than most, and was consistently entertaining. I even liked most of the characters, who each got a spotlight episode with their backstory.

I recommend to apocalypse fans. This show is available to stream on Netflix.