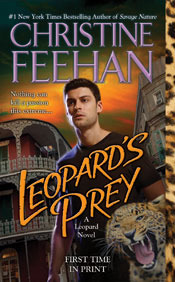 Renny is a New Orleans cop (and a leopard shape shifter) hunting a serial killer who murders in a strange, ritualistic manner. Meanwhile, he falls hard for a rock star turned jazz singer who is just emerging as a leopard and has no idea who or what she is.

There was a lot to like about this story. For one thing, it was satisfyingly steamy romance with all the wildness of a shape shifter story and all that implies — inner animals, mating, etc. The characters were reasonably well developed, though I have a sense that I might have understood Renny better had I read the prequels first. I’m still not sure I understand his past, or his problem with saying the three magic words, just from reading this story. The book was fast-paced, difficult to put down, and very engaging.

But this wild ride didn’t end very well, and I knew it wouldn’t from pretty early on. I had the identity of the serial killer pegged from the moment we met him and nothing swayed me from that certain knowledge for a second. I complained recently about books in which there are absolutely no clues present, making the ultimate revelation is stupid and arbitrary. I said I would prefer the other extreme if I had to choose between the two and I stick by it. Even knowing who it was, I did enjoy the wild ride, especially sine the book was as much romance as mystery. Still, in a perfect world the mystery is somewhere in between obvious and unguessable. 🙂

I also realized early on that the romantic tension would be a quest for the three magic words. Honestly, there’s not a lot left when you establish two characters as soulmates from a previous life who have just recognized one another in their current incarnation thanks to the instincts of the beasts within. It’s kind of cool at first, and very steamy, but not great for sustained romantic tension.

All in all I would read more books by this author and I recommend this book to people who enjoy steamy shifter romance.