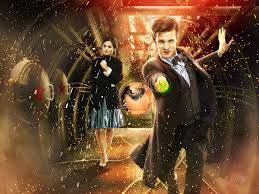 I’m a bit behind on Doctor Who this season. It’s not because I don’t love the show, but because ever since they split the season into two parts I’ve had more trouble staying focused. This Spring I was in the middle of three other series and only recently decided it was past time to catch up. I’m only four episodes down right now, and basically enjoying Clara as the new companion.

Last night I watched “Cold War.” It’s the one depicted in the picture — The Doctor and Clara running around on a Russian submarine in the 1980s after an ice man from Mars. It was a horrible episode for a lot of reasons, but it also cemented something in my mind that I’ve been feeling for a long time:

The Doctor needs to let go of his security blanket. Er, his screwdriver.

The idea of a sonic screwdriver was cute for a while. The fact that ti did any number of random things was silly but in a good way.

In “Cold War,” the entire episode involved The Doctor running around aiming his sonic screwdriver at the ice man like a weapon while begging the thing not to hurt us. Aside from the fact that this was boring and not at all like The Doctor, there was that gosh darn screwdriver.

He uses it too much. The Doctor is supposed to have seen so much, know so much, and just be frantically brilliant. These days, I feel like he’s the man with the sonic screwdriver.

The Doctor is more than any one tool. He can save the universe without it. That being the case, maybe it’s time he lost it, at least for a while, to prove to himself and the writers of the show that he’s better than a tool.