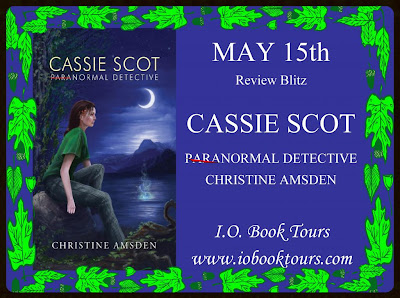 I made the decision to hire Innovative Online Tours about a month and a half before the release of my latest novel, Cassie Scot: Normal Detective. I had already signed up with Pump Up Your Book but was feeling a bit nervous about the number of reviews I was getting through the bigger tour. Ultimately, I think I was right to feel a little nervous about that, although the PUYB tour did do well for me. (See their review.)

Reviews are critical. Big reviews. Little reviews. Blog reviews. Goodreads reviews. Amazon reviews. Barnes and Noble reviews aren’t bad, although that company has not properly established its potential role in the world of on-line product reviews (much to their detriment, but that’s their bigwigs’ concern, not mine).

For that reason, reviews are a huge part of any blog tour. I won’t go so far as to say book tours without reviews aren’t useful, but reviews go one extra step — they aren’t just putting the book in the reader’s face. They’re putting it in the reader’s face with the unbiased addendum, “And this was awesome! You SO need to get this book!” (Doesn’t work so well coming from the author. 🙂 )

Of course, you have to have written a really good book. And then you have to believe in yourself. I know from experience that these are at least equally difficult tasks.

So on to Innovative Online Tours…

I was worried that I wasn’t getting enough reviews so I started searching specifically for places that would help me distribute my book for review. I wasn’t going to pay directly for reviews. (Oh never do this! It’s a scam and a half. Can you say conflict of interests? I knew you could!) Going through an online tour service to get a book review works because you’re not paying for the review. You’re paying for someone to help you find people who are willing to review the book. The reviewers themselves only get a copy of the book, which is appropriate.

Innovative Online Tours doesn’t even promise good reviews. They warn you right up front that they will not attempt to control what their reviewers say about your book.

Innovative Online Tours are extremely inexpensive. I paid $75 for their 10-stop release-day review blitz. All of their packages are inexpensive, and they seem to specialize in single-day events… blitzes, cover reveals, etc. They do have weeks-long tours for reasonable rates as well, but there is a certain magic that can happen when you flood the Internet all at once. It’s called getting those volatile amazon sales ranks low enough that amazon itself starts plugging for your book.

There’s inexpensive and then there’s cheap. You know what I’m talking about. 🙂 I consider Innovative Online Tours to be inexpensive. Granted, their tour hosts aren’t the biggest blogging fish on the Internet, but they deliver reviews. On May 15 (release day), I got not 10 but 12 review stops (more on that later) and all reviews went up on amazon.com, swelling my numbers there. Most of them went on goodreads as well. My amazon sales rank bottomed out as dozens of people bought the book on the exact same day. I can’t say it will work as well for anyone else — there is a lot more to a successful book sale recipe than any single tour — but I do believe that for $7.50 per review stop, this is a value.

My banner is up top and it’s nice if simple. I didn’t expect a lot from the tour banner for $75, to be honest. But if I have one complaint about the company, it’s not the banner so much as the fact that the banner no longer has a home to link to. They have their current banners listed on their front page but only a handful of older tours all listed together on the same page. You do not get a personalized tour page with a list of stops. Since I run my own web page I know how easy and inexpensive a feature this is so I find it disappointing that IO Tours didn’t offer this standard, especially during the tour. Most of the virtual book tour services I have worked with continue to list my tour stops even after it’s all said and done.

IO Book Tours responded promptly and professionally to every inquiry I made of them. They provided their service as promised and on time. This was one of the smoothest running tours I did with the fewest hiccups. They even went the extra step of allowing 2 extra stops for no additional charge when more reviewers showed an interest in my book.