About three years ago, I decided to teach myself to knit. This involves watching a lot of YouTube videos (over and over again) and a lot of undoing hours’ worth of work because I made a single mistake. This also involved long periods of giving up in frustration because knitting is hard, especially when you’re not even sure how to name the problem so that Google can understand it.

I’ve never been a very crafty person. You might be tempted to blame this on my poor vision, but you’d largely be wrong — there are entire crafting groups specifically for the blind and visually impaired. We can craft with the best of them, often using techniques that rely a bit more on feel and on projects with a little less fine detail. And I do recall, many, many years ago, that I used to crochet but gave it up because I struggled using any hook smaller than a size P (that’s huge). But ultimately, the reason I believe I am not a crafty person is because I am a perfectionist, unforgiving of errors, especially in my own work. It’s a wonder I ever wrote a novel, but there it is!

When I picked up knitting, it wasn’t with some grand plan of making adorable whatevers and selling them on Etsy…my reasoning was far simpler and more embarrassing: I chew my nails, especially when I’m watching TV, and I thought having something to do with my hands would help (I was right).  Those early projects did not inspire me to keep knitting, but whenever I would quit, I started chewing my nails again. So I persevered, motivated by dubious factors that nevertheless proved effective.

Recently, I decided to try knitting a Christmas stocking. This has proven to be a real challenge, but at the same time, I am newly motivated by the desire to give my family something special, something that, imperfect though it might be, was created with love and intention. Holiday crafting, I am beginning to feel, has more room for forgiveness because there is joy in the spirit of creating and giving. And you know, next year, may 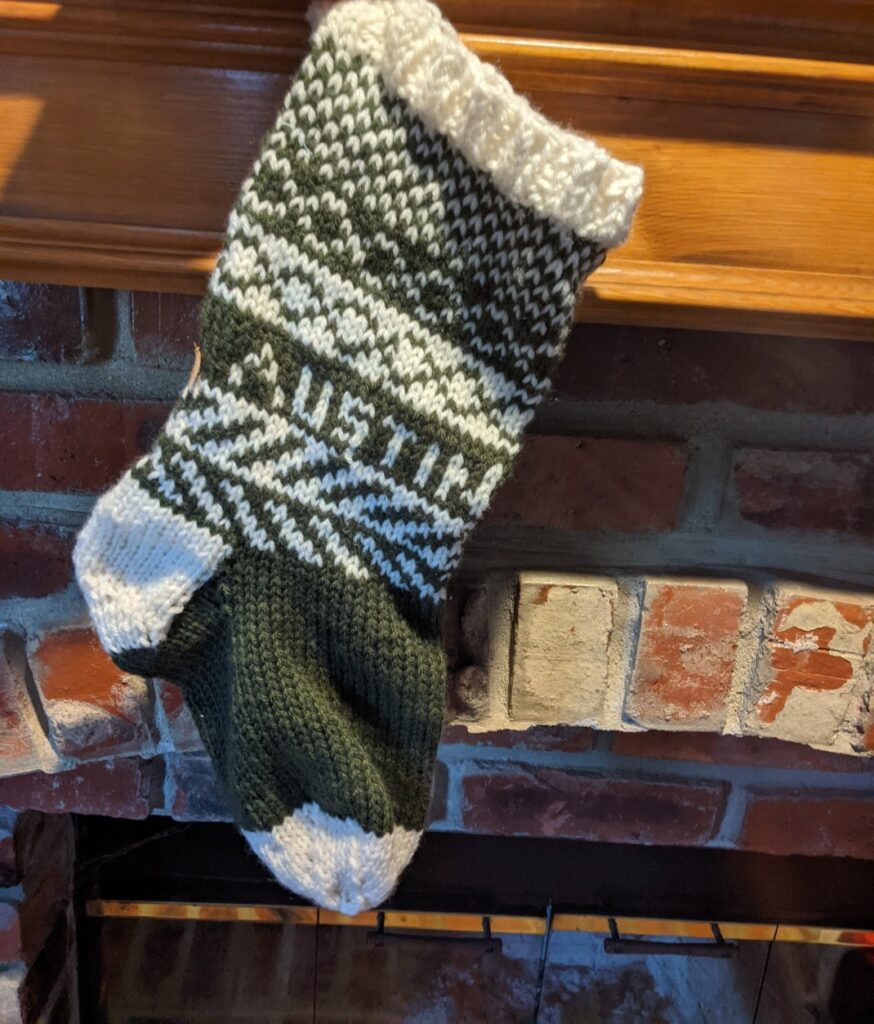 be I knit a better stocking.

The stocking pictured here is not my first attempt; it’s my fourth. And unfortunately, I will be tossing the first two because whatever normally-sighted knitters might think, it is not easier for me to cross stitch a pattern onto a finished stocking than to learn fair isle knitting (working two differently colored strands across the same row).  Actually, I’m finding fair isle knitting to be a lot of fun, and I’m absolutely thrilled by the potential for creating truly personalized designs.

Next up…my son wants a dragon on his stocking. We shall see!