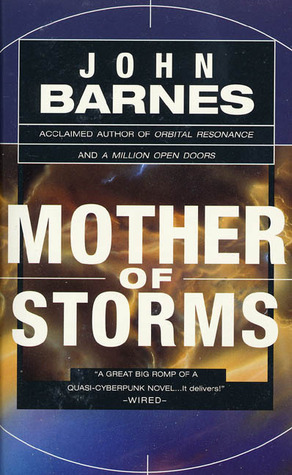 Immense. That’s the best word I can think of to describe this story.

At first glance, it’s the story of an apocalypse — a nuclear attack accidentally releases enough methane into the air to cause catastrophic global warming and resulting hurricanes.

But it doesn’t take much of a peek beneath the surface to see that this story is a classic scifi lover’s utopia. Who are we? Where are we going? What is the nature of humanity? I got all this and more as I slowly grew to realize that the apocalypse in this story is more of a motivating factor than a real theme and that what was happening to Louie and Carla was far, far more interesting.

Going back to the “immense” comment — this story was told in a true omniscient viewpoint, and though this is not usually my preference, I have to say that it was a good choice for a novel set on such a global scale. I even enjoyed some of the tales that would never be told — viewpoints that were washed away to see.

Then of course, there’s what happened to Louie and Carla. I don’t want to say too much for the sake of spoilers, but writing about their experiences is an unenviable task for any mere mortal.

I do have the usual concern that this book will be dated. It’s set in 2028 (from a 1995 copyright date) and as with many of my favorite classic authors, he predicted a great deal of advancement that has not and certainly will not come to pass in the next 13 years. Not to mention political realities that seem far-fetched (and honestly would have seemed far-fetched in 1995). I often think scifi needs to cast its dates further afield, if for now other reason so that your work won’t be dated in your own lifetime. And if it does become dated in 2195, well, it still stands as a testament to what we thought of the future way back when. In the case of Assimov, Heinlein, and other greats whose predictions have come and gone, I think it does stand as a testament to their own times. I’m concerned that this might be less the case here, especially since there has been so much technological advancement since 1995, just in wildly different ways than predicted. I don’t know. Perhaps I should wait until 2028 to make this call — if I’m still around doing reviews then, someone remind me and I’ll update this one. 🙂

My biggest concern with this story was XV, a technology that allows people to broadcast their thoughts. It takes over journalism the way we know it as people want to experience the news rather than simply see it. Setting aside that our understanding of the human brain is so limited, making this unlikely in the near future, let’s assume it happens. I’m just not sure that people will really want to stay plugged in to someone else’s thoughts and perceptions all the time. You could argue that people don’t often think for themselves all the time and really like others to do their thinking for them, but the word “effectively” needs to go in there somewhere — because people like to think they’re unique and thinking for themselves.

Of course, that’s just the sort of debatable “criticism” that makes this a thought-provoking read. Scifi should do that, if it’s any good — get you thinking and maybe disagreeing.

If you’re a scifi fan, I really recommend this!