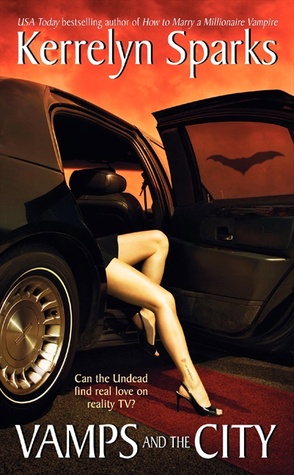 The silly fun continues in this second book in a vampire series that works by not taking itself too seriously. In this volume, Darcy, a young vampire recently freed from Roman’s harem, wants to get a serious job reporting the news like she did in her human life. But in the vampire world there’s only one network — DVN (Digital Vampire Network — “On 24 hours because it’s always nighttime somewhere!”) The trouble is, vamps are sexist. She only got the interview because Darcy isn’t an obviously feminine name and in the end, instead of getting a job as a journalist, she gets to produce the first vampire reality show — “The Sexist Man Alive!”

But Darcy isn’t convinced, as others are, that the sexist man alive will necessarily be a vampire. She decides to mix things up by casting some humans. That’s when Austin comes in. He’s a member of the Stake Out team, which is investigating vampire activity. We met Austin in book #1, when Shawn was kidnapped by her father, the head of the Stake Out team. Well, her father is on a mission now — a mission to find and rescue his happily married daughter from her vicious vampire hubby. When he learns about the new reality show, he fixes the casting so that two of his agents will get picked, including Austin.

I am continuing to enjoy this series. I liked Darcy’s story, and I liked the way this book ended (sorry, no spoilers). The romance continues to be (and I suspect will always be) “love at first sight” but there’s enough other stuff going on that I can forgive it. Besides, this isn’t the sort of book you want to take too seriously. 🙂