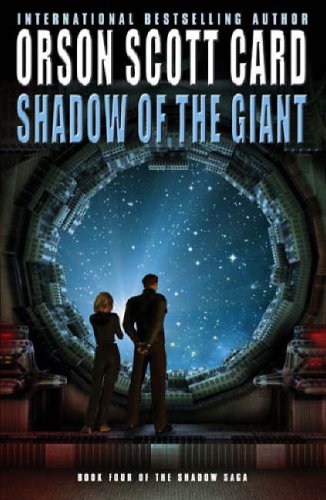 And finally… except not so finally… I have reread Shadow of the Giant. I say “not so finally” because I recently learned that there IS another book in this series! It came out last year while I was looking the other way. With that in mind, much of my former reservations about this book are put to rest. The first time I read this book, I didn’t believe there were any plans for a sequel and I remember feeling cheated out of a real ending. Now that this feeling can be set aside, I can review the book as a mid-series novel. Although a mid-series novel with some degree of finality.

This book is a bittersweet farewell. Bean ends up setting off into space, travelling at relativistic speeds so that he won’t age while the rest of the world passes him by. Meanwhile, everyone else’s story pretty much comes to an end here. I won’t tell you what happens to them all except to say, perhaps, the only thing that could have happened.

Some of this story is devoted to Bean and Petra’s continued search for their missing embryos (now babies), but a lot of it is about united the world under the Free People of Earth and about dealing with the mess caused by ambitious battle-school graduates fighting one another for world domination.

Though this parallel series began with Bean, and continues to follow Bean, it is really more Peter Wiggin who is the focus of this volume. By the end, I have a fair idea what his brother, Ender, might have written in both The Hive Queen and The Hegemon, two works referenced at the end of the original Ender’s Games novel. I think I came away feeling about Peter precisely what I was supposed to — that I did not love him, but I respected him.

Meanwhile, I am eager to discover what will become of Bean, who manages not to be dead yet, though to those he left behind on Earth he may as well be. Bittersweet, like I said.

I liked this book better than Shadow Puppets. I’d say I liked it almost as much as Shadow of the Hegemon (book 2 in this series). Nothing’s going to beat Ender’s Shadow, though. That was a tough act to follow. 🙂