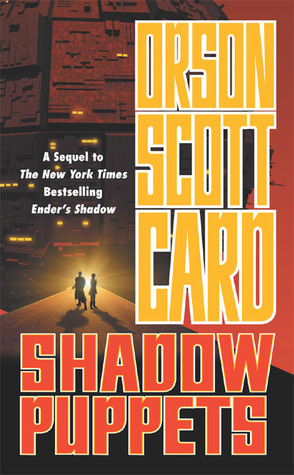 Continuing my reread of the shadow series, I find myself getting into Shadow Puppets, the third installment in the series which runs somewhat parallel to the Ender’s Game series.

Petra convinces Bean to marry her and have babies early in this book. Since I knew it was coming this time, I didn’t find the idea quite as strange or abrupt as I recall feeling the first time, but I still struggled with one thing: How old are these characters? The passage of time is not well kept in this series, which is probably my biggest complaint. I’m pretty sure Bean is about 13 and Petra 20, although the book reads as though Bean is older and Petra younger. That can’t be true, though, since Petra was older than Ender, who was older than Bean…

To be honest, given Bean’s exceptionality, I don’t care what the numbers are nearly as much as I just want to know them. He’s only got about 20 years to live, so how many are up?.

I am a person who watches the calendar. I keep careful track of the ages of my characters in my own book and it’s a detail I tend to try to follow when I read other people’s books. So this drove me batty, *especially* upon reread because I was trying even harder to look for clues that would help me sort it out! I don’t think they’re there.

Regardless, Bean marries the woman he rescued at the end of Shadow of the Hegemon, a fellow battle-school grad and member of Ender’s jeesh, and they have babies through in vitro fertilization in order to try to isolate the ones with Bean’s life-shortening syndrome and avoid bringing them into the world.

It all goes badly wrong. There is no test, and as soon as Petra is implanted someone steals the rest of the embryos. They try to kidnap her while they’re at it, but that doesn’t work out.

Meanwhile, Achilles is still making trouble, this time in the Hegemon compound where Peter Wiggin made the mistake of thinking he could handle the psychopath. Bean and Petra believe he is behind the kidnapping of their embryos.

This book was a little weird, IMO. I did enjoy it and I do think it is a fair follow-up to Shadow of the Hegemon. But I’m not sure I was ever convinced that Peter would have been taken in by Achilles, I was iffy about the whole embryo-napping plot, and I disagreed with some of the religious philosophy in this book.

I did enjoy watching the battle school grads struggle in this book, and not just Bean and Petra. We were able to revisit several members of Ender’s jeesh as they more or less set out to rule the world.

This is a book I recommend to those who are as invested in Bean and this universe as I am. It had its issues, but all in all it was an enjoyable read that made me think. I am looking forward to rereading the next book in this series, Shadow of the Giant.