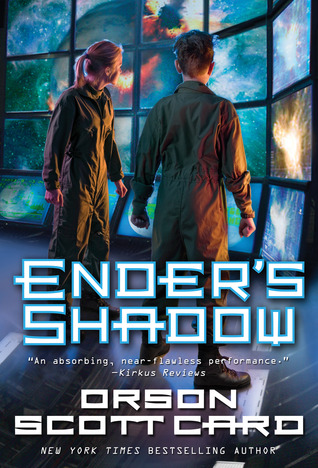 Ender’s Shadow is a companion novel to the better-known Ender’s Game, a parallel story told from the point of view of another character — Bean. I loved Ender’s Game (as you can see in my recent review of that book), but I love this one even more. I give Ender’s Game 5 stars, but I would give this one 6 if I could. I’m not sure why I like this one more than I liked Ender’s Game except that I loved Bean. He’s remarkable and tragic and I just plain love him. Ironic, I suppose, since the novel claims that Bean might have been chosen to fill Ender’s role, except Ender had one quality Bean didn’t have — empathy and charisma. People would die for Ender, but Bean is just a know-it-all. Well, he really is! He has a genetic “defect” that gives him off-the-charts intelligence. It saved his life, and as we find out in this book, it helped Ender to his victory, though Ender never realized.

I recalled Ender’s Game as being a psychological story. In truth, *this* is the psychological story. I think after a decade, I blurred the two stories together in my mind. Both are excellent. Both should be read. They could honestly be read in either order, although I tend to recommend reading them in the order the author wrote them, with this second. But if you liked Ender’s Game at all, don’t stop there! This is just amazing.