What’s the old saying? “Home is where the heart is.” It must be true because one of the prevalent themes in story-telling is the concept of Home – Having one, being a part of one, rejecting one, leaving one, desperately trying to find your way back to one. Humans have an innate honing device that draws us to a nostalgic place of comfort and love. Some of the most influential stories of our time use HOME as a central theme. After having experienced the wonder and glory of Oz, Dorothy said there was no place like it. Her journey brought her to the realization that her black and white world of farm animals and twisters was really where she belonged. Thrust onto an island while the war-torn world around them has no idea of their whereabouts, the children in The Lord of the Flies are in constant pursuit of returning home while in the process, create a home. And more recently, Katniss Everdeen initially strives to win The Hunger Games to go where? Back Home.

In The Coal Elf, Ember Skye deals with this notion of Home from the moment she is called to her Life Job. When she is sent to the Mines, her memories of her life Aboveground grip her so tightly that she is almost blinded by nostalgia. The entire novel follows her path of dealing with those memories, confronting certain realities, and altering her own perceptions as to where she belongs, where she fits in, where she’s meant to be.

So what is HOME? What defines it? For me, it’s an unseen structure made up of memories. Spring birds singing in the morning as I waited for the school bus. Running outside on a cool summer night to flag down the ice cream truck. Standing on tree stumps in my backyard as dead leaves fell from the autumn trees. The smell of my father’s work boots in the hallway. Cuddling with my sister on Christmas Eve. Coming home from school and being so angry with my mother for cleaning up my room. My uncle’s voice booming as he and my mother sang Kenny Rogers’s songs. My concept of Home expands far beyond the actual dwelling itself, and now I’m making a Home for my daughter, hopefully helping to build those memories of love and comfort she will seek refuge in her future. 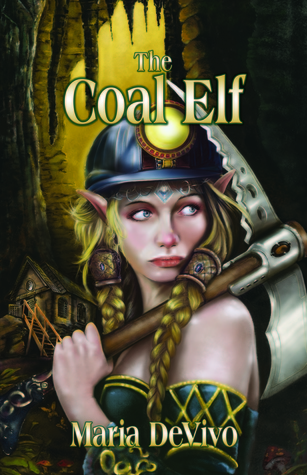 Ember Skye is a fed up teenage Coal Elf with a big ashy chip on her shoulder. Having been torn away from a carefree life and forced into a world of dirt and darkness has started to get the best of her. And being the only girl-elf working as a coal miner at the North Pole doesn’t help much either!

Then there’s Sturd: a power-hungry, twisted elf with a checkered past and a serious grudge against Ember. Slowly but surely, his maniacal tendencies are revealed, leaving Ember with the sacred “Naughty List” literally in her lap.

When a mysterious illness threatens to decimate elves both Above and Underground, Ember is thrust into a journey that will see her confront the literal and figurative demons of her past and lead her to the head of the North Pole himself.

Yes! Santa is real. But this isn’t your childhood Christmas tale!

“…A story with plenty of twists and turns, the reader is drawn into a world of dust and darkness with tension so strong it can be felt throughout. You will hold your breath at the challenges Ember must face and be pulled along as the plot thickens.” ~ Anne K. Edwards, author of The Last to Fall

“The teenage protagonist of Maria DeVivo’s debut novel, The Coal Elf, published by Twilight Times Books, November 2012, got screwed by “the Boss” of the North Pole. Imagine having your wonderful life and future destroyed when, instead of receiving the job assignment to make toys or bake cookies for a living, you were thrust into a gloomy, underground life of mining coal for the children on the naughty list. Ember Skye stole my heart from the first page as DeVivo describes her life as a Coal Elf and sets up the conflict and her epic battle with the antagonist, Sturd, a despicable, nasty elf who embodies evil.

Throw this conflict, these and a handful of other memorable characters into an incredibly creative North Pole setting, and you have a story that I could not put down. What I particularly enjoyed was DeVivo’s portrayal and extension of Christmas with her creation of a detailed fantasy world where we learn how the North Pole might actually work. This awesome setting is expertly woven into the story so that I was transported into this amazing world as I read.

Do yourself a favor and read The Coal Elf–I highly recommend it. This is one of those books that should be made into a movie (Tim Burton are you listening?). Great characters, engaging plot, believable dialog, wonderful setting and, above all, writing that compelled me to keep turning the pages (that’s what we all really want as readers, right?).” ~Daniel Springer, author of the award-winning The Wilco Project

Amazon Buylink: “The Coal Elf is currently at a special holiday price of $2.99”

Maria DeVivo is a New York native who has had a lifelong love affair with “the pen.” A graduate of St. John’s University, she has a passion for all things mystical and mythological. She has taught 7th grade Language Arts since 2000, and in 2010, designed the curriculum for an academic elective course entitled Folklore, where she was able to share her passion and knowledge on concentrated topics such as folktales and mythology with her students.

Having grown up in a large Irish/Italian family (where Maria is the oldest child, and of course, the wisest) the mystery and wonder surrounding the holidays were a main staple of her upbringing. At the age of seven, when her mother finally admitted “the truth” to her, she has become somewhat of a “Santa-phile”, an obsession that has rooted its way into every fiber of her being. Maria is one of those people who cries when Santa makes His grand appearance at the Macy’s Thanksgiving Day Parade. Coupled with an obsession for all things dark and demented, her debut novel, The Coal Elf, was born.

Maria now lives in Florida with her husband, Joe, and daughter, Morgan. When not teaching or writing or running around after her daughter, she enjoys drinking iced coffee, watching horror movies, and playing video games.